A gene that is associated with regeneration of injured nerve cells has been identified by scientists at Penn State University and Duke University. The team, led by Melissa Rolls, an assistant professor of biochemistry and molecular biology at Penn State, has found that a mutation in a single gene can entirely shut down the process by which axons — the parts of the nerve cell that are responsible for sending signals to other cells — regrow themselves after being cut or damaged. 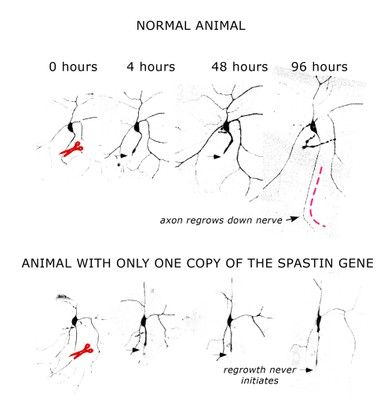 “We are hopeful that this discovery will open the door to new research related to spinal-cord and other neurological disorders in humans,” Rolls said.

The journal Cell Reports will publish an early online copy of the paper on November 1, and also will include the paper in the monthly issue of the journal, which will be published on November 29, 2012.

Because axons, which form long bundles extending out from nerve cells, survive throughout an animal’s lifetime, nerve cells need to be resilient. In the event of injury or simple wear and tear, some can repair damage by growing new axons. Earlier research from Rolls and others suggested that microtubules — the intracellular “highways” along which basic building blocks are transported — might need to be rebuilt as an important step in this type of repair.

“In many ways this idea makes sense,” said Rolls. “In order to grow a new part of a nerve, raw materials will be needed, and the microtubule highways will need to be organized to take the new materials to the site of growth.”

Spastin emerges as a key player

Rolls’ team therefore started to investigate the role of microtubule-remodeling proteins in axon regrowth after injury. In particular, the team members focused on a set of proteins that sever microtubules into small pieces. Out of this set, a protein named spastin emerged as a key player in axon regeneration.

“The fact that the spastin protein plays a critical role in regeneration is particularly intriguing because, in humans, it is encoded by a disease gene called SPG4,” Rolls explained. “When one copy of this gene is disrupted, affected individuals develop hereditary spastic paraplegia (HSP), which is characterized by progressive lower-limb weakness and spasticity as the long-motor axons in the spinal cord degenerate. Thus, identifying a new neuronal function for spastin may help us to understand this disease.”

To study the role of spastin, Rolls and her team chose the fruit fly, drosophila, as their model organism.

“On the molecular level, many of the processes associated with nerve-cell growth and regrowth are the same in humans as in fruit flies,” Rolls said. “And, like all other animals including humans, fruit flies have two copies of every gene — one from each parent — so different combinations of each gene can lead to different observable traits.”

The team members bred three genetically distinct groups of fruit flies in the laboratory to observe how various spastin gene combinations might affect the behavior of nerve cells after injury. The first group of flies had two normal copies of the gene; the second had one normal copy and one mutant copy; while the third had two mutant copies. Then, in all three groups, the scientists cut the axons of the flies’ nerve cells and observed the regeneration process.

“In fruit flies with two normal copies of the gene, we observed that severed axons elegantly reassembled themselves. This process is supposed to take place if the fly is to heal from nerve trauma since life events, as well as wear and tear, tend to cause such damage,” Rolls said. “But, interestingly, in the other two groups — the fruit flies with two or even one abnormal spastin gene — there was simply no regrowth, indicating that what we have here is a dominant problem.”

Dominant diseases arise when only one copy of a disease gene is disrupted. For example, Huntington’s disease in humans is a dominant disease because people who have inherited a normal gene from one parent and an abnormal gene from the other parent still become ill. Meanwhile, cystic fibrosis is a recessive disease: people with at least one normal gene copy do not manifest the disease at all.

The scientists also found that an impaired spastin gene affected only how the axons regrew after being severed. That is, the gene did not seem to play a role in the developmental stage when axons were being assembled for the first time. In addition, the researchers found that, while the gene affected the flies’ axons, their dendrites — the thread-like parts of the neuron that receive information from other cells and from the outside world — continued to function and repair themselves normally.

“Now that we know that spastin plays an important role in axon regeneration and also that this gene is dominant, we have opened up a possible path toward the study of human diseases involving nerve-cell impairment,” Rolls said. “In fact, our next step is to probe the link between hereditary spastic paraplegia (HSP) and axon regeneration.”

Rolls added that the SPG4 gene that encodes human spastin is only one of the disease genes associated with HSP, so she and her colleagues now are testing whether other disease genes also play a role in nerve-cell regeneration.